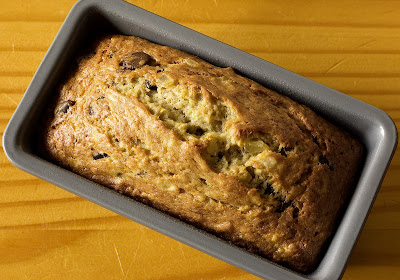 I spent the weekend savoring A Homemade Life and made my first recipe from it on Sunday. Molly's Banana Bread with Chocolate and Crystalized Ginger was calling to me. It was knockin' on my door and I had to answer. I even invited it in for some coffee and a chat. We spent a lot of time together, me and that banana bread. Hoo boy. (I'd like to leave out the part where I ate almost half a loaf of this bread in less than 24 hours, but the 'dangerously good' title should probably be addressed. Baker beware!)

I've made banana bread many times in my life. It was one of the first 'from scratch' things I made as a teenager. It's easy and fairly straightforward. The thought never crossed my mind to to add chocolate chips to banana bread until one day, my babysitter sent my then 3 year old daughter home with a loaf of chocolate chip banana bread that the daycare children had helped make. The addition of chocolate to banana bread pretty much blew my mind. How could I have never thought to do that?! It was the best banana bread I'd ever had! I'm sure it wasn't so much the specific recipe, but banana and chocolate are a match made in heaven and I had been totally deprived of this wondrous combo for twenty some odd years! I took note, and from then on, if I made banana bread, it most certainly had chocolate in it.

When I saw this recipe for banana bread with chocolate AND crystallized ginger, I knew I had to make it, like, immediately. I love ginger, but I didn't know it until not even a year ago. It wasn't until I started eating sushi that I found my love of ginger. (The fact that I didn't try sushi until I was 27 years old pretty much blows my mind as well, considering how obsessed I became with it almost immediately - an obsession that hasn't waned a bit from that first taste.) I'll admit, it took some getting used to, I wasn't in love right away. But I found myself eating more and more of it each time I had sushi, until I was eating the entire mound they give you, whether or not I had any sushi left to go along with it.

Because of this, one random shopping day I picked up a package of crystallized ginger from Trader Joe's. Ohhhh yum. All those big sugar crystals covering the spicy, chewy, dried ginger had me right away. I'd tried some dried ginger before - it was the kind that's dyed red and nothing like this crystallized ginger I found at TJ's. The red stuff was not for me, but the crystallized kind, oh yeah. I usually have to hide the bag so I don't eat it all in one sitting, going for just one more piece, no matter how much my mouth still burns just a little from that last bite.

I realize that not everyone is into ginger, crystallized or otherwise. I get that. It's spicy and different. If you don't like it, you probably wouldn't like it in your banana bread. If you do like it, please, make this bread as soon as you can cultivate yourself a nice brown banana! Actually, make that 3 brown bananas, since that's about how many you'll need ;) 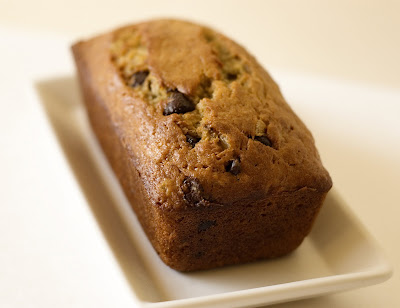 BANANA BREAD WITH CHOCOLATE AND CRYSTALLIZED GINGER
from A Homemade Life, by Molly Wizenberg

Method
Preheat oven to 350 degrees. Grease a 9 x 5" loaf pan.
In a small bowl, melt the butter (or alternately, place in a heatproof bowl and let melt in the oven while it's preheating). Set aside and let cool slightly.
In a large bowl, whist together the flour, sugar, baking soda and salt. Add the chocolate chips and crystallized ginger and whisk to combine. Set aside.
In a medium bowl, beat the eggs with a fork; add the banana, yogurt, melted butter and vanilla and stir to mix well. Add this mixture to the dry ingredients and stir just to combine - do not over mix. Pour into prepared pan and smooth the top.
Bake until the top is a nice golden brown and a toothpick (or wooden skewer) inserted into the center comes out clean, about 50 minutes to 1 hour. Let cool before slicing (if you can wait that long!) 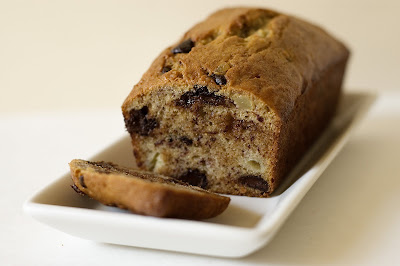