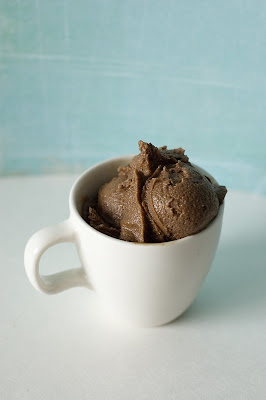 I've had this recipe saved for at least a year. I remember coming across it and thinking how easily I could make it. I'm not sure why I never did, but I always forget to freeze the ice cream maker base, which is a lame excuse, but true nonetheless.

After recently having made chocolate sorbet, I'd kept the ice cream maker base in the freezer so I could make the gelato. I just got my last two wisdom teeth taken out, and I knew I'd want something cold and tasty, so I decided to make this. The original recipe calls for toffee bits to be added but left those out this time for obvious reasons :) 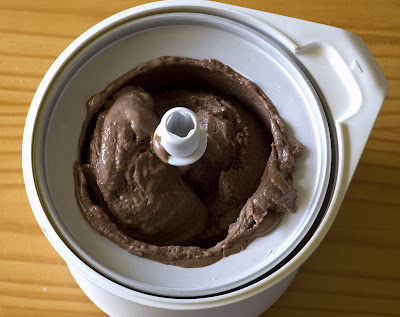 This is my 1 quart Donvier ice cream maker that I bought at a thrift store years ago. I remember I had recently saw an episode of Martha Stewart (way back before she was a felon - I preferred her show format back then, it was so much better, don't you think?!) where she made ice cream and she mentioned Donvier specifically, so I snatched it up for a great price. You do have to churn it manually every couple of minutes, but it only takes about 20 minutes total to make a quart. This was probably one of my best thrift store finds ever - it was in the original box and even still had the instruction manual! I'm so glad I've kept it all these years, even though I've only used it a handful of times. I'm always so glad I have an ice cream maker when I come across a really yummy sounding recipe. 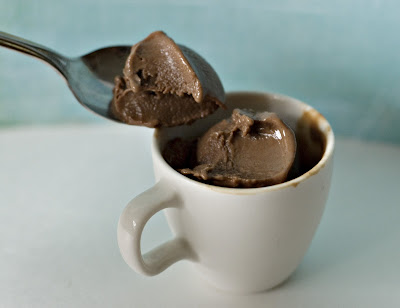 Transfer gelato base to medium bowl. Mix in cream. Place bowl over large bowl filled with ice and water and cool, stirring often, about 30 minutes.
Process gelato base in ice cream maker according to manufacturer's instructions, adding toffee during last minute of churning. Transfer to container; cover. Freeze at least 3 hours and up to 2 days.

This gelato turned out just as good as I was expecting it to! I absolutely love cinnamon and chocolate together, so I knew it had to be good. I used Callebut bittersweet chocolate and next time would love to try half bitter or semi sweet and half milk chocolate. I'd also like to add I used all whole milk, including in replacement of the whipping cream in this recipe. I think it still turned out great, but can see how the cream would make it even better and richer. This recipe is definitely worth a go if you're in possession of an ice cream maker.
Posted by Jayme at 4:20 PM