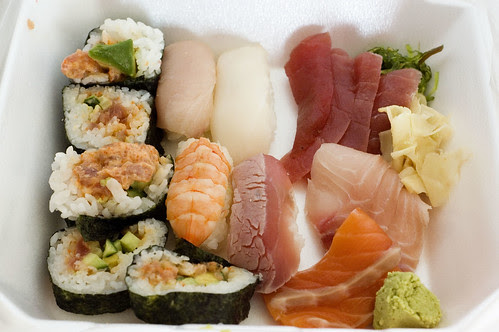 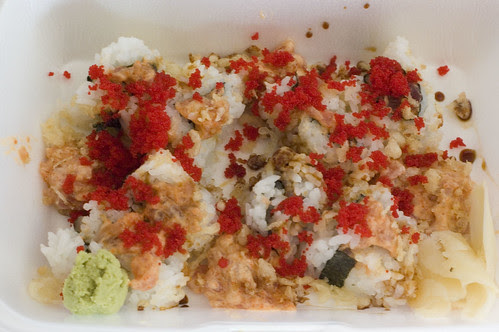 Mmm. Sushi. This is what I had for dinner last night. I had never tried raw fish sushi until last July and have had it just about once a week ever since! Somehow I always knew that if I tried sushi, I would really like it. It was definitely love at first bite. I was always a bit scared away by the 'raw' factor - I've been a vegetarian since I was about 15 or so, but I started eating fish (cooked that is) about 7 years ago when I was pregnant with my daughter for the added protein and have continued to eat seafood ever since. Mostly just the occasional salmon fillet, that is, until I discovered sushi.

I call myself 'vegetarian' but I suppose I'm actually pescetarian. No one really knows that term though, so I just say I also eat fish. Now, of course I do realize that the very thought of me referring to myself as vegetarian quite possibly would instantaneously bunch up the panties of many hard core vegetarians and vegans but I'm not hardcore like that lol. I just do what works for me.

At any rate, the sushi and sashimi combo was awesome. The spicy tuna crunchy habanero roll was equally amazing. It doesn't look so pretty in the photo, but it sure was tasty! I've never seen such red fish roe before - it was much brighter in person than in the pic and it was gorgeous. The roll itself was spicy and a bit creamy and it had flecks of tempura crumbs that added a nice crunch to it. All in all, it was a great meal to start the long weekend!
Posted by Jayme at 5:02 PM

Email ThisBlogThis!Share to TwitterShare to FacebookShare to Pinterest
Labels: sushi, take out